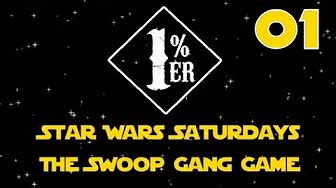 This one-shot is part of a celebration of 3 years of Rich Rogers’ Star Wars Saturday games series, brought to you by members of the Gauntlet RPG Community. In the Outer Rim's Minos Cluster, there is a forest planet called Yelsain. The planet is home to massive trees, some as tall as 400 meters. The planet is notable for its lower-than-average gravity because of the lack of natural heavy metals. Almost no metal can be found anywhere on Yelsain, both because of the composition of the planet‘s crust and because of the peculiar values of the inhabitants (who call themselves settlers), who restrict its import. Among these idealistic settlers, a new generation have grown up and thirst for action and adventure. They call themselves... the Tree Punks, and they ride their swoop bikes for fun and profit.