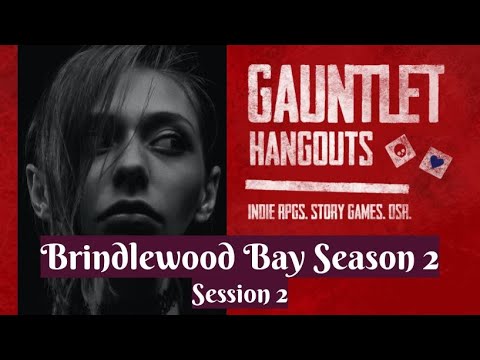 Wanna catch up with the first season? Here is the playlist: https://www.youtube.com/watch?v=aS1qS7aJOmM&list=PLjQd10MVA_8c2qRRiTwOUTSTNMvf45eGX Brindlewood Bay is a TTRPG created by Jason Cordova! It's inspired by the tv show Murder, She Wrote but with a sinister and supernatural twist. The game focuses on the Murder Mavens: retired women who love their mystery novels and solve crimes in their cozy bayside town. An amazing new Murder Maven joins us! Rosemary is an ex-con who runs a halfway house at Brindlewood Bay, and she's late for our strange book signing party turned crime scene. Ruby and Monica are old hands at this by now and swiftly go over the scene to find clues, while Doris is caught up in strange things that reflect the other side of t he Dark Conspiracy hanging over our peaceful town... This game is part of the GAUNTLET HANGOUTS, we're a gaming club were folks from all over the world meet online to play tabletop roleplaying games. You can find out more here: http://gauntlet-rpg.com/ Brindlewood Bay was released as a reward for patrons of The Gauntlet! Usually they release an issue of the Codex every month. I love the Codex magazine, but this was a nice change of pace, I hope they do it more often. You can find out more about the patreon and codex here: https://www.patreon.com/gauntlet You can now find Brindlewood Bay on DTRPG! https://www.drivethrurpg.com/product/... I'm so inspired by this game that I'm currently making my own investigation game based on a couple of moves from this game. You can find Sword Queen Games at: https://temporalhiccup.itch.io/ or catch an early peek at my patreon: https://www.patreon.com/swordqueengames