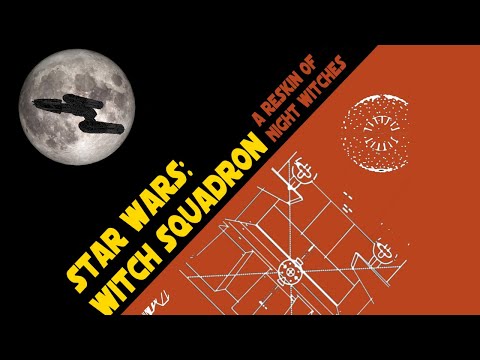 TONIGHT WE FLY A long time ago in a galaxy far, far away... There was a starfighter squadron in the Alliance to Restore the Republic composed entirely of non-human beings. Hailing from farflung planets in the Outer Rim, they were Rebel pilots hastily trained to help out in the last, desperate days of the fight against the Empire. These 200 beings, flying outdated starfighters from the days of the Clone Wars, attacked the invading Imperial forces every night, fighting to bring freedom to the population of the Core Worlds. To each other they were family, with bonds forged in blood and terror in the cold black of space. To their Rebellion commander, a former Imperial Moff, they were an embarrassing group of uncivilized aliens. To the Empire, they were simply the Witch Squadron. Witch Squadron is a loving reskin of Bully Pulpit's Night Witches, a tabletop role-playing game about women at war. In this reskin, you'll play non-humans who join the 588th Squadron to fight for the freedom of the galaxy. Can you do your duty and strike blow after blow against the Fascists? Can you overcome discrimination and outright sabotage and rise above your species-ist comrades? Are there limits to patriotism—or endurance? Play Star Wars: Witch Squadron and find out!